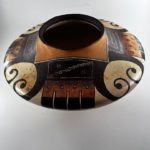 This large seedpot is both art and experiment.  Its design is a particularly elaborate rendition of an ancient design revitalized by Nampeyo in the late 19th century, inherited by generations of her family, and adopted by other potters at Hopi.  The pot was fired using lignite coal, a fuel not used at Hopi for 500 years and being experimentally revived by the pot’s maker, Bobby Silas.

Dung replaced coal as the fuel of choice after the Spaniards introduced sheep to the Hopi in the 1500’s.  Coal burns longer and hotter than dung, making more durable pots. Nearly 500 years after unknown Sikyatki artists invented this saucer shape, developed the eagle-tail design and fired pots with coal, Bobby has adapted their form, design and firing method.  Jar 2022-13 is evidence of his success.

The width of the jar is almost 6 times its 2-inch base, a very high ratio. The opening is 5.0-inches wide. The high-temperature coal firing has hardened the clay so that when it is lightly struck with a finger, it rings with a high pitch, like crystal glass.  When fired at a lower temperature using sheep dung, the surface of vessels made with grey Hopi clay typically blush golden where the fire was hotter.  Fired with coal, this same clay reacts differently, exhibiting dark spots and streaks, as seen on this pot.

The essential elements of design on jar 2022-13 are exactly what you would expect of a Nampeyo-derived pattern: a red square around the mouth, incurved black “wings” pendant from the corners of the square, and linear tails emerging from the square’s sides.  In contrast to dung-fired pots, the colors on jar 2022-13 are muted.

Unusually —but ironically like the next pot added to this collection, vase 2022-14 by Rachael Sahmie— there is a black framing line on the inside of the lip of this jar. The dull red square around the opening of the jar is 4.8125-inches on a side. Its edges are defined by two thin framing lines with a slight unpainted space between them.  The design does not have lower framing lines.

Pendant from each corner of the red square are thick black and curved “wings.”  Like most versions of this design —but unlike Mark Tahbo’s version 2022-09— these two wings form a single element, wide at the base and narrowing to a point.  Nampeyo’s wings concluded with this point (2005-16), but her daughter Fannie added black balls to the tips of her eagle-tail wings (2009-01) and many potters at Hopi have adopted Fannie’s convention. Each wing on jar 2022-13 displays a terminating ball.

Between the four sets of wings are four rectangular designs, 2.875-inches wide.The base of this element  borders the thin framing line around the red square above.  These elements display two designs, alternating as you turn the pot.

One pattern of design is more complex than the other.  The complex design is built around a squared crook incorporating seven 90-degree turns.  The crook is composed of two or three rows of unpainted squares, the number of rows varying within and between the two renditions.  The long outer border of this design has 40 to 44 such unpainted squares; the short outer border featuring 16 to 19 such squares.  It appears that the unpainted squares of the crooks are a residual pattern left when Bobbie painted this section of the pot black.  Moreover this crook surrounds a second crook formed by an undulating line incorporating five 90-degree turns.  This thin undulating line was inscribed using a pointed metal tool with a wooden handle.

The second design used as a base element between the wings is simply a rectangle defined by a thin, unpainted line.  Descending from the upper right corner to the lower left corner is a staircase of 8 to 10 steps, the number varying between the two renditions. The steps in the version with 10 steps are thinner and more-carefully drawn than the version with fewer steps.  The upper left and lower right corners feature a small circles.  This design was also inscribed by a pointed metal tool with a wooden handle.

Below all four of these rectangular black designs are red four-pronged forms.  Using black paint, Bobby has feathered in an element of thin, wispy, lines that hangs like a curtain from the upper edge of these red combs. These darker wispy elements have the effect of darkening the upper boundary of the combs.  While the four combs are all painted red, there is variation in their coloring.  For one pair of combs on opposite sides of the pot , the red seems to have been  applied rather thickly resulting in a darker red.  The alternate pair of combs display a very light-red, almost pink, color.

Centered at the base of each prong of the red combs is a black dot incorporating a white inscribed circle, sort of an eye.  The short red prongs of the combs support short, black and squared-off feather tips.  The overall effect is of feathers with a red base incorporating an eye design and sporting black tips.

The pot is signed “Silas.”

An understanding of jar 2022-13 requires a viewer to remember that Bobby has chosen to try to replicate ancient Hopi pottery that was made for use and is thus he is working within that framework. Since Nampeyo, the format and color of the eagle-tail design is quite fixed and proscribed by tradition.  After seeing multiple eagle-tail pots, the design becomes less interesting. Bobby uses several strategies to enliven the form and design of jar 2022-13.

The “flying saucer” shape of the vessel was developed by women half a millennium ago, when these pots were used for storage.  Most seedpots made at Hopi today reduce the size of both the pot and the opening, thus making the pots purely aesthetic forms.  Bobby has formed a pot that is impressive simply because of its size.  Moreover, pot 2022-13 has an opening wide enough for a hand to enter, capturing the utilitarian feel of ancient pottery.  The width/base ration of this jar is very high, giving this large pot a sense of lightness.

Most modern renditions of the eagle-tail design (and other designs from Hopi) are painted precisely, a response to collector demand for high-priced “perfect” pots (2017-09).  Bobby is playing a different game here.  Ancient pots made at Hopi were made for use, not display.  Thus ancient potters were not so concerned with exactness of design and produced pots with significant within-design variation.  Bobby follows this tradition and thus produces more spontaneous, less exact designs.

Moreover the pot carries random spoting from the coal firing, most noticeable on the unpainted surface enclosed by the wings and the particular grey blotching of one of the four red combs.  Such discolorations interrupt the visual flow of the design and can be seen as errors when compared to the careful coloring of modern high-value dung-fired pots.  On the other hand, these fire marks are typical of the ancient Sikyatki pottery that Bobby is trying to revive.  My eyes required patience and adjustment before I was able to see this coal-fired pot on its own terms.

The designs of the black rectangular forms between the eagle wings are both more engaging and more delicate than those found on other renditions of the eagle-tail design.  These centrally-located designs particularly engage a viewer’s eyes.

The small circles in the simpler rectangular form visually link with the circular eyes in the red comb below. The two red design elements —neck square and tail combs— encourage a viewer’s eye to gaze over the entire design, thus unifying it.  Because the red combs are feathered with dark paint and show variation in color from the coal firing, these red combs display variation in color.  These variations add life and interest to this old design.

The tail base is black, as are the wings.  Thus there is a continuous dark presence around the red square that encircles the mouth of the jar.  The four sets of tail tips are also black, giving the overall design a dark, powerful sensibility. The contrast between Bobby’s rendition and Nampeyo’s (2005-16) is striking.The design on 2022-13 is darker, richer and more masculine than Nampeyo’s version.

Bobby Silas set out to reproduce the form and design effect of ancient Sikyatki pottery.  With jar 2022-13 he has succeeded, producing a jar that is strikingly different than modern Hopi pottery, even though it carries an often-repeated Hopi design.  This is a jar you need to take your time with, accept its differences, and be open to its aesthetic.  The process is richly rewarding.

Purchase History:
Purchased from the Heard Museum shop, 11-4-22. I assume they purchased it directly from the artist.